Google recently announced that on April 21st it will be changing how it will rank sites in their search results.  On that day Google will be favoring sites that it determines are mobile friendly above all other sites.  While I have an opinion about this decision, that's not what this post is about.  What I wanted to write about is what this means to Joomla websites.

Google has provided a site testing tool at https://www.google.com/webmasters/tools/mobile-friendly/ which will allow you to test your site and see if it is ready.  If it is not the tool will provide some guidance on changes you can make to fix your site.  Unfortunately the guidance for Joomla users is not very helpful.

I used my own site as a test.  My site was recently still on Joomla 2.5 when I ran it through their tool and got the following results: 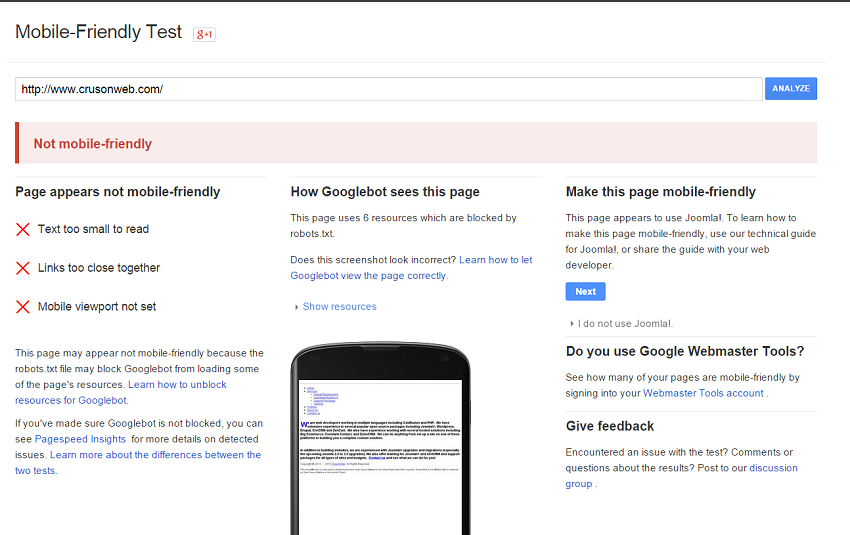 I already knew my site wasn't mobile friendly, but I wanted to see what they said about Joomla so I used the link on the right to see their advice.  The first thing it says on the top of the page is: 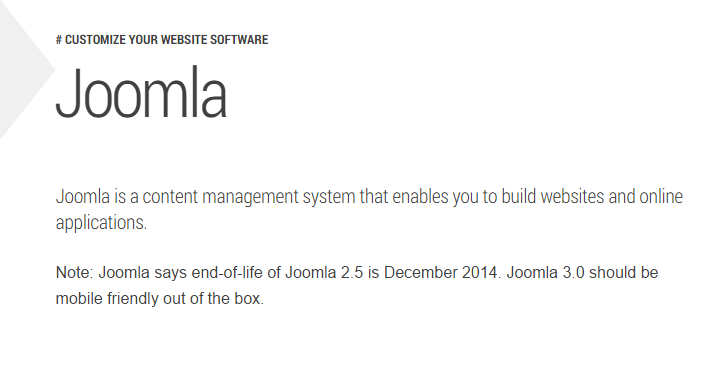 Before even beginning through the steps I saw a problem, Joomla 3.0 makes it easier to create a responsive template but if the template you have built or downloaded doesn't specifically implement bootstrap and isn't built to be responsive then it still won't be mobile friendly.  But I decided to continue on and see what they said.  A little further down:

So despite the title mentioning updating the theme, the instruction indicates that just updating Joomla is enough.  So I decided to give it a try.  After making a back up of my site I ran the Joomla update to go to Joomla 3.4.  Once the upgrade was complete I ran through the test again and got: 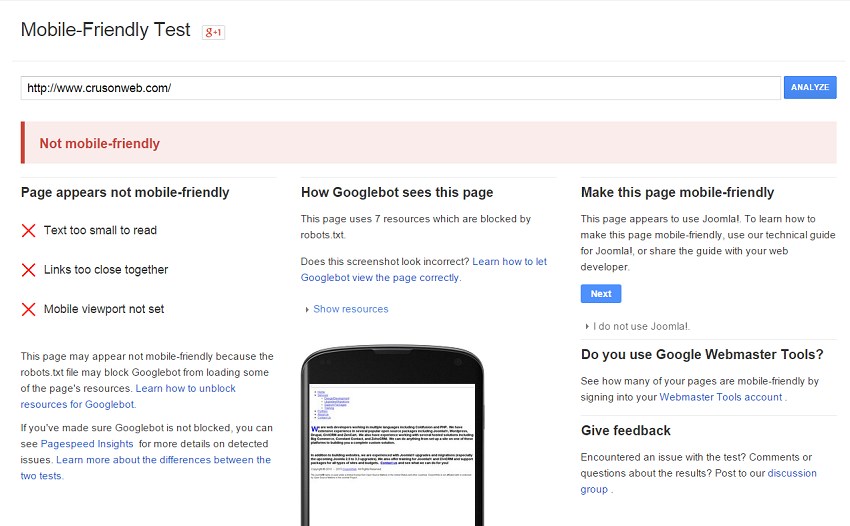 So no real surprise there, my site still isn't mobile compatible despite upgrading to Joomla 3.4.  I decided to try one more simple tweak before resigning myself to needing to rebuild the template completely.  When using Joomla 3 you need to manually implement bootstrap in your template.  I generally try to avoid adding bootstrap to an existing template because it often has unexpected affects on things like form elements.  But I wanted to be thorough, so I added the code that needed to be added and ran the test a final time.  The final result was:

So once again it didn't clear up the problems that Google is finding.  My final conclusion is I am going to have to do a more extensive rebuild on my template to fix the problems, must more than Google indicates needs to be done for Joomla.  This isn't a surprise for me, and I was planning to build a new template soon anyway, this just lights a fire under me to do it sooner rather than later.  So if you are concerned with your search position (which I am sure you are) and your site isn't currently responsive, you should be sure to begin testing and working on your template now.  Despite what Google says, this is not a quick and simple fix.